The Dangers of EMFs

Home > The Dangers of EMFs 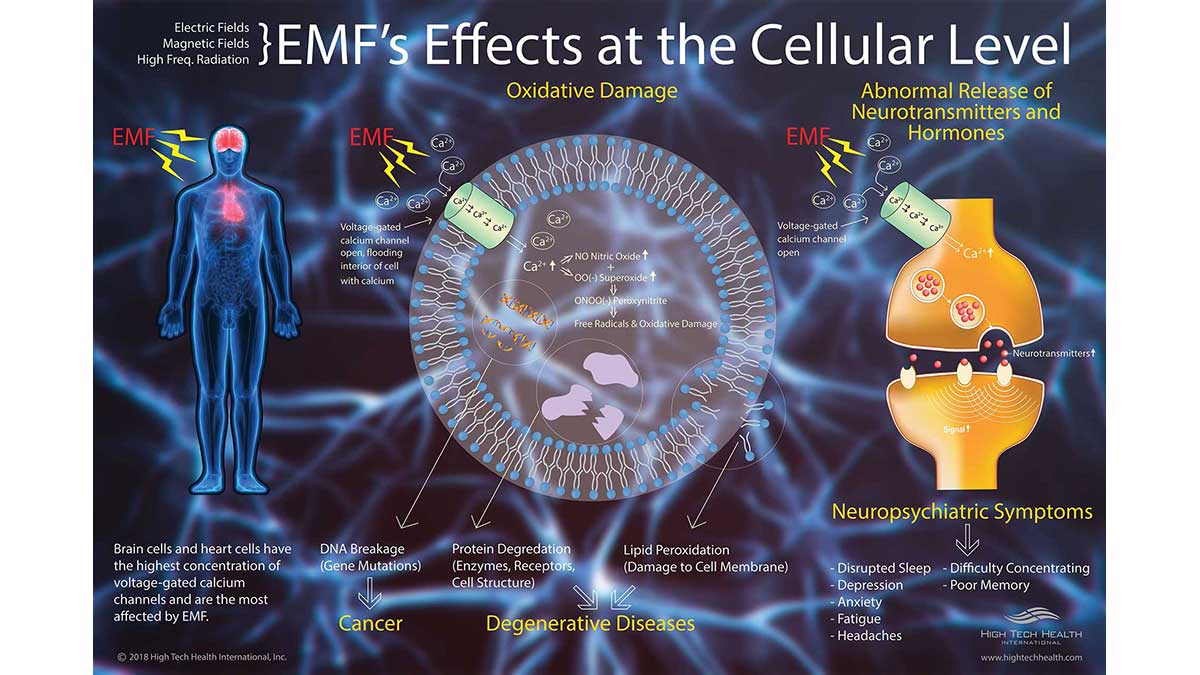 The Dangers of Electromagnetic Fields (EMFs) 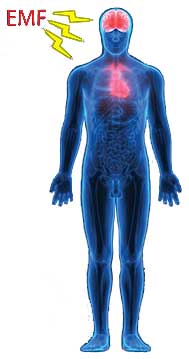 There has been increasing evidence in recent years of the harmful effects of electric and magnetic fields (EMF), and increasing research devoted to this topic.  This is of particular concern when purchasing an infrared sauna, because most infrared saunas expose you to extremely high EMFs.  EMF exposure has long been known to cause a common set of neuropsychiatric symptoms including difficulty sleeping, depression, anxiety, fatigue, and difficulty concentrating.  Recent research has shown other potentially more dangerous effects of EMF exposure including oxidative damage and premature aging of our cells, and DNA breakage and even cancer.  High Tech Health is the only infrared sauna company able to produce an infrared sauna with virtually no EMF, due to patented triple anti-field infrared heaters, and comprehensive EMF mitigation of the internal wiring. At best, some other infrared sauna companies have some magnetic field mitigation, but still have extremely high electric fields, and they completely fail to address this other component of EMF on their website or EMF reports.  Read about the three components of EMFs here, and read about our triple anti-field heaters here.

In the past, skeptics argued that the EMF from electronics had no mechanism to cause biological effects because it is “non-ionizing” (below the frequency known to directly break molecular bonds). However, numerous in vitro studies have since proven direct biological effects on cells exposed to low frequency EMFs, and have identified a likely mechanism (1,6-9,15,16).  Fibroblasts and lymphocytes, when exposed to EMFs, show an almost immediate increase in intracellular calcium (6,8), and the effects of EMF exposure are blocked when these cells are treated with calcium channel blockers such as verapamil (6,9).  Numerous other studies have confirmed the role of calcium in the cells response to EMF, and it is likely that these EMFs are directly activating the voltage gated calcium channels (VGCCs) in our cell membranes.

Disfunction at the Cellular Level

VGCCs are present in the highest concentrations on neurons, neuroendocrine cells, and muscle cells, including smooth muscle and cardiac muscle.  Histologic changes seen in mice after exposure to EMF mirrors this distribution, with the greatest changes seen in the central nervous system, heart, and testes (10).  Calcium is an important signaling molecule in neurons and neuroendocrine cells (hormone releasing cells).  Increases in intracellular calcium signal the cell to release neurotransmitters or hormones.  Aberrant activation of VGCCs cause disordered neural signaling, with an initial increase in neurotransmitter release, followed by decreased synaptic transmission as cells down regulate receptors and synapses in response.  Tissues studied from rats exposed to EMFs showed smaller than normal nerve cells, with damage especially to the synapses (10). 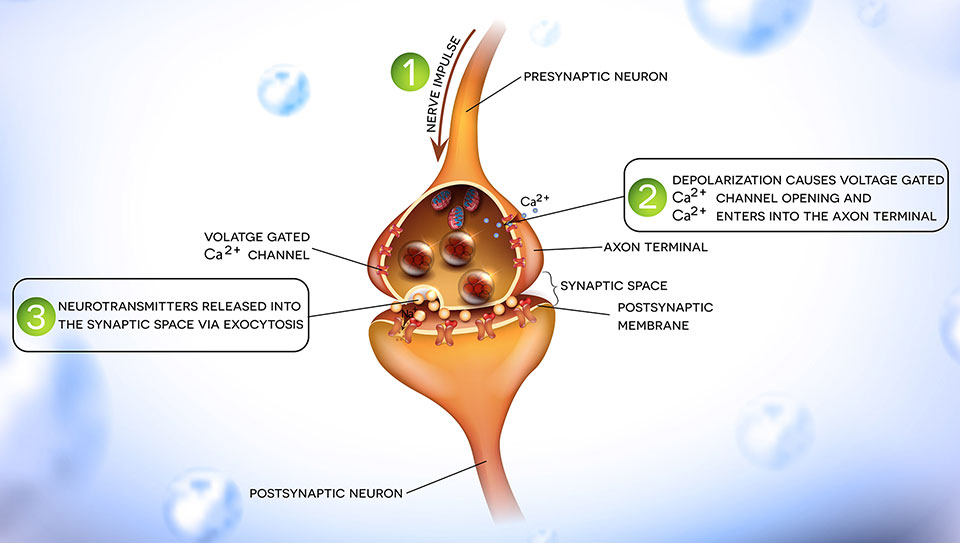 Neuropsychiatric symptoms associated with exposure to electromagnetic fields have been recognized since the 1950s-1960s.  A 1972 report from the Naval Medical Research Institute, citing over 2300 studies, documented 40 neuropsychiatric symptoms associated with occupational exposure to microwave/radiofrequency EMFs (1,2).  A second large report from NASA in 1981 reported 19 similar symptoms, and also found exposure to EMFs to be associated with EEG changes (3).  By the 1990s these symptoms were referred to as “microwave syndrome,” most commonly described to include sleep disturbances, headaches, depression, anxiety, fatigue, difficulty concentrating, memory changes, nausea, and numbness/tingling (1,4-5).  Since then, especially with concern related to the now widespread use of cellular phones, there have been numerous studies confirming and expanding on these symptoms (1, 14-17, 24).  A large cross sectional study compared inhabitants living near a mobile phone base with controls and found that those living near the EMF had significantly higher rates of headaches, memory changes, sleep disturbances, tremors, dizziness, and depressive symptoms (24).

Calcium acts as a signaling molecule in our cells, activating enzymes and molecular pathways that lead to an increase in nitric oxide, which then combines with superoxide to form peroxynitrite.  Peroxynitrite acts as a free radical, and also leads to the formation of other free radicals which increase oxidative stress in the cell. (6,7,10-12) Oxidative stress directly damages the structural molecules of the cell, such as the cell membrane and proteins, and even causes DNA strand breakage.  Oxidative stress, and the accumulation of damaged proteins, is known to be at least one factor in cell aging and the development of age-related disease.  Oxidative damage is implicated in the development of atherosclerosis, neurodegenerative diseases, and cancer. 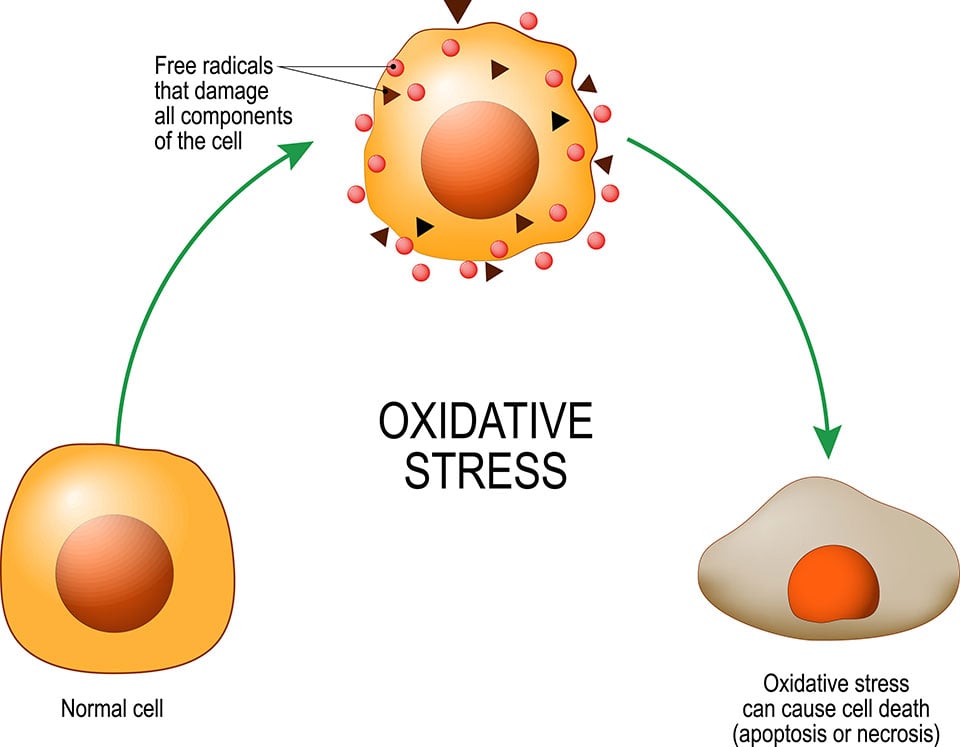 Oxidative Stress is a Potential Cause of Cancer

DNA strand breakage is a known result of oxidative stress and cell aging, and is known to be a potential cause of cancer, as the genes that regulate the cells growth and cycle are damaged.  Many epidemiologic studies have looked at associations between EMF exposure and cancer, and numerous studies have found an association between EMF exposure and increases in childhood leukemia, lymphomas, many types of brain cancers including glioma, schwannoma and medulloblastoma, breast cancer, thyroid cancer, and others (13-15).  Animal studies have shown significantly higher rates of cancers in rats exposed to EMF, when also exposed to other known carcinogens, such as gamma rays or benzene (13,14). Thus, it seems that EMF can act as a carcinogen in itself, as well as making other known carcinogens more carcinogenic.  In 2011, the International Agency for Research on Cancer (IARC) categorized RF EMF as a “possible” (level 2B) human carcinogen (13,14).  However, many scientists would like to see it categorized even higher than this, given the growing evidence.

Given the growing evidence of the harmful effects of low frequency EMFs, there has been an urgent call from scientists to government regulatory agencies to enact appropriate safety guidelines limiting public exposure to these harmful fields (13,15,16).  There have been a number of petitions in recent years drafted and signed by dozens of scientists urging government bodies to alter their recommended maximum exposure levels.  Recently 206 International scientists signed a statement sent to the United Nations Secretary General and member states, saying the international safety guidelines are inadequate (16).  As with many things in history that are now known and widely accepted to be harmful, the official government regulations lag behind the scientific evidence of harm.

In vitro studies have shown increased gene transcription in some oncogenes (cancer causing genes) and in genes associated with growth and development after exposure to just 8mG (0.8 uT) (18), and animal studies have shown oxidative stress in the spleen and testes of male guinea pigs after exposure to electric field as low as 300 V/m (19,20).  Epidemiologic studies have found a significant increase in leukemia in children living near high power lines and chronically exposed to EMF in the range of just 4 mG (0.4 uT) (23). Magnetic field EMFs at just 2 - 3 mG (0.2 - 0.3 uT) were shown to alter the rate of Na/K-ATPase, the pump that creates the electrical gradient across cell membranes required for nerve conduction and other cell functions (25).  In comparison, while sitting inside a typical sauna with carbon-based heaters, you are exposed to EMFs of up to 150 mG magnetic field and 2000 - 3000 V/m electric field.

High EMF Hinders the Efficacy of Other Saunas

Nearly all other infrared saunas have extremely high electric fields, extremely high magnetic fields, or both, due to their design of heaters and wiring.  Most sauna companies use carbon-based heaters.  These are very inefficient, so they use more power than necessary, and they must cover the majority of the interior walls in order to sufficiently heat the sauna. That need for higher power, the large area they cover, combined with your proximity to them while in the sauna, result in extremely high EMF exposure.  Since EMF can act to make carcinogens more carcinogenic (see above), it is reasonable to conclude that typical infrared saunas have the potential to worsen the impact of a person's existing toxic burden, as well as work against such a sauna's ability to support the body's detoxification pathways.  However, High Tech Health saunas feature a comprehensive mitigation of EMF in the wiring and patented triple antifield infrared heaters. They are the only heaters that block all types of EMF, so that while in our saunas you are exposed to virtually no added EMF, with EMF levels not significantly higher (typically lower) than ambient levels in the home.  We have had a third-party EMF engineering company confirm this by finding and measuring the maximum EMF levels found at the surface of our heaters. Click here to see their report.

Have the lowest total electric fields and lowest total magnetic fields of any sauna.  In fact, they are one of the lowest sources of EMF exposure in the home.  Click here to read more about our far infrared sauna.

You can order a copy of this poster from our online store. 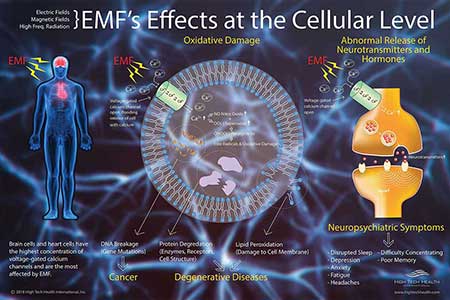 has been added to the cart. View Cart
});