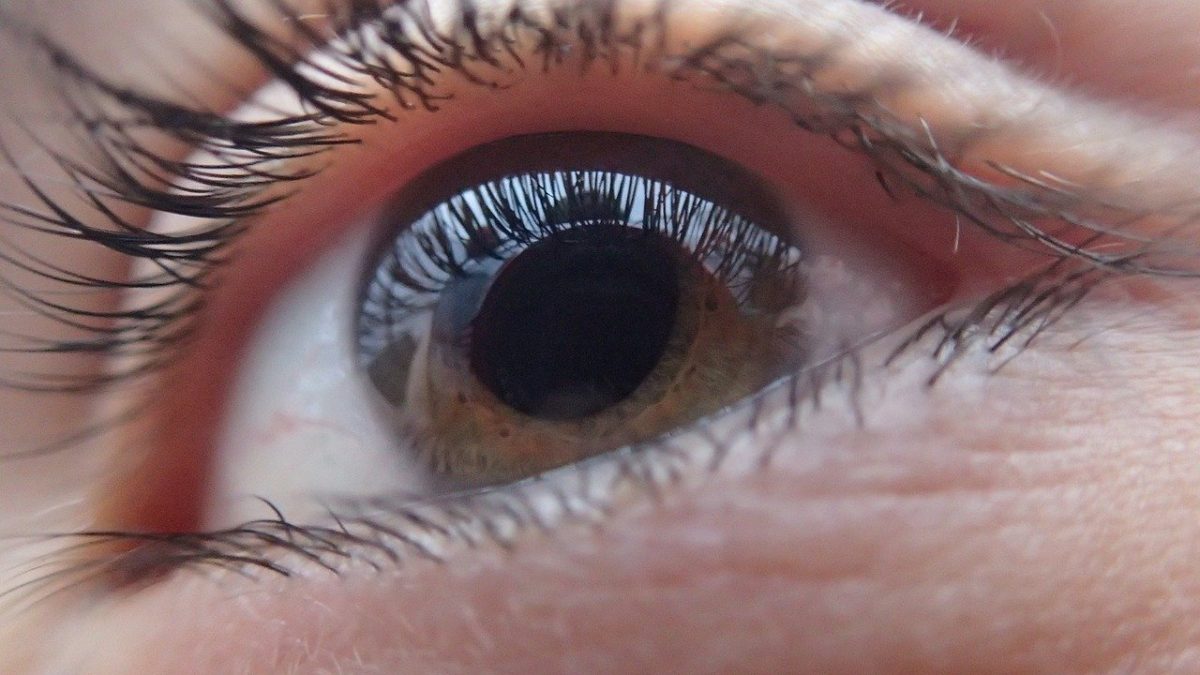 A cataract is the clouding of the lens of the eye.  The lens is the transparent structure in the anterior of the eye that allows light to pass through to the retina.  In order to be transparent, the organelles in the cells of the lens are eliminated during differentiation, and because of this the cells in the center of the lens cannot produce new proteins.  The crystallin proteins are lens proteins that must maintain their precise structure as to not refract light that enters the lens, and maintain transparency.  They are relatively long lived and stable proteins, but over time all proteins suffer damage, due to oxidative stress and aging.  When damage to the crystallin proteins accumulates, the proteins unfold, and form protein aggregates, which refract light and cause clouding of the lens.  (3-5)

Near infrared has long been known to promote cataract formation with high or repeated exposure.  Iron, steel, and glass workers are occupationally exposed to high levels of near infrared.  This was examined in a large study on ironworkers in 1984.  Iron workers were found to have 2.5 times the risk of cataracts compared to controls, and the risk of needing cataract surgery was 12 times that of non-exposed controls.  (6)

Many animal studies have since confirmed this (7,8).  Near infrared exposure causes damage to the crystallin proteins in the lens, making them less soluble and prone to aggregation.  When rabbits were exposed to near infrared light at 0.2 W/cm2 for just 5 to 10 seconds, the soluble protein content of their lens decreased in a dose dependent manner.  Soluble lens protein dropped from 290 mg/g, to 245 mg/g one hour after 5 minutes of NIR exposure, and to 209 mg/g after 10 minutes of exposure. (7).

According to the International Commission on Non-Ionizing Radiation Protection (ICNIRP) statement, the IR energy from IR-A and IR-B poses a risk to the human eye.  The ICNIRP commission recommends “that to avoid thermal injury of the cornea and the possible cataractogenesis (cataract formation), IR-A and/or  IR-B exposure should be limited to 10 mW/cm2 for lengthy exposures (> 1000 seconds), and to 1.8 t–3/4 W/cm2 for shorter exposure durations.” (10)

While animal studies have been able to determine thresholds for acute exposure causing immediate cataract formation, there is little data on safe levels of long-term exposure, and therefore thresholds for long term repeated exposure have not been established.  The ICNIRP acknowledges that “cataract has been epidemiologically associated with chronic intermittent exposure at low irradiance.” (11)

High Tech Health has done the research on the risks of near infrared, as we do on every aspect of the health effects of our saunas, and our Transcend saunas are far infrared only.  Read more about our lowest-emf far infrared saunas here.

cataracts near infrared
Share
has been added to the cart. View Cart